After the dialogue, the awarding ceremony of the 5th Jinxi Awards 2019 was held immediately, and Gu Family's "Floating Light" sofa won the award for the best soft sofa. All this happened on the day before yesterday, that is, on March 20, when Huang Minli also called Gu Jiangsheng "Little Gu, our Gu's Gu ...", there was a sense of familiarity and appreciation between words.

Just two hours after the end of the award, the Intellectual Property Protection Station of the Shenzhen International Home Fair received a complaint against Gu Jiafu for patent infringement. The complainant was Huang Minli â€™s Minhua Furniture Manufacturing Huizhou Co., Ltd. (Minhua for short), It was claimed that Gu's two products infringed its patents.


On the same day, the complaint station accepted the matter, and the lawyer of the exhibition intellectual property station also checked the situation with Gu Jiafu. Gu Jia will have 4 hours to prepare the defense materials. If it does constitute infringement, it will be dismantled.


Just three hours after Minhua submitted the complaint materials, the media published an article "Furniture in the furniture war, Gu Jiajia was frequently infringed by Minhua (Chihuashi sofa)" touching porcelain ", and then the parties quickly released relevant articles. , Although there is a reason, but each has a certain tendency.


"After a lapse of 6 years, on March 20, 2019, at the Shenzhen International Furniture Fair, Minhua once again complained to the Shenzhen International Furniture Fair Intellectual Property Protection Station of the infringement of its patents to the Intellectual Property Protection Station of Shenzhen International Furniture Fair. In this case , The author learned through interviewing the relevant person in charge of Gu Jia Home: before receiving the Chi Hua Shi complaint notice from the Patent Protection Office of the exhibition, Gu Jia also saw Chi Hua Shi's manuscript from the media side as in 2014, with "sensational" It can be seen from the title of this article that this operation is Chi Huashi's idiomatic method. "From this quoted text, it is no wonder that Gu's home furnishing has reacted so quickly, it turns out that he already has experience.

In fact, not only in 14 and 19 years, but also in 15 years, the two sides also had litigation cases. At that time, Minhua sued Gu Jia for unauthorized use of the "First Class Sofa" logo for marketing promotion, infringing on the company's trademark registration rights. 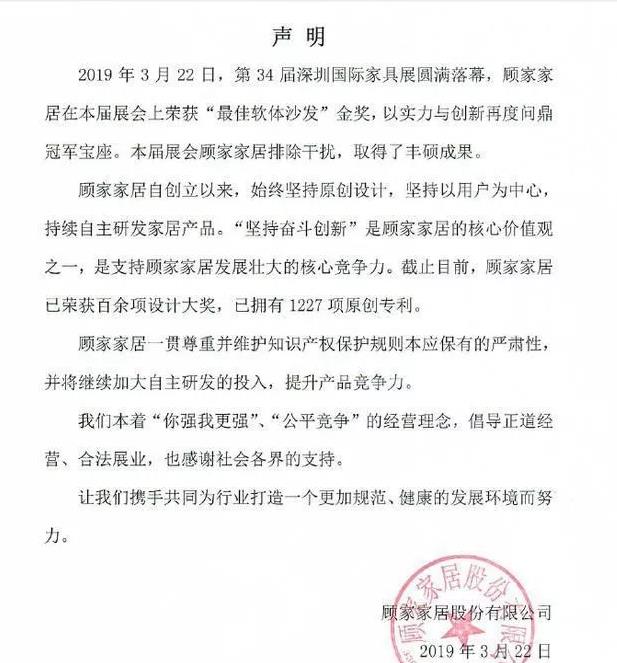 Minhua is a well-known king in the field of functional sofas. Gu Home Furnishing has promoted the strategy of large home furnishing. In these years, it has expanded rapidly. In 2013, it reached a strategic cooperation with the famous American brand La-Z-Boy, marking the development of functional sofas in China will enter a diversified The competitive landscape. Gu Jia has successively acquired Xilianmen, a domestic mattress listed company, and Xibao Home, a domestic mattress export leader, and directly competed with Minhua Holdings' other main business, mattress. Since then, the two companies are no longer in a relationship between wells and rivers, and there have been various frictions.

In this way, it is not an exaggeration to say that Minhua and Gu's family are old friends. Huang Minli and Gu Jiangsheng could not have been unaware of this, but for them, it must have been just a little friction-it did not prevent the two people from shaking hands and feeling sorry for each other on stage. After all, the annual sales of the two companies are on the scale of 10 billion. Huang Minli will open another 1,000 stores in 2019. Gu Jiangsheng pointed to the scale of 100 billion in the future large home industry. If the leader does not have a tolerant structure, it is impossible to change the enterprise. Do it on this scale.


And companies that are on the right track have rules of conduct. As Gu Jiangsheng said on the forum day, his pro-cousin called himself and said that he was only comforted when he was fired. The relationship between human relationships and careers is very clear. As for the entanglement between Minhua and Gu's family, today the law is becoming more and more perfect, and its own court has made open and fair judgments.

Not only Minhua and Gu Jia, but also Nanyang Dick accused other companies of infringing patent designs at the Shenzhen exhibition. I think this kind of friction between enterprises is a good thing, which will prompt enterprises to pay more attention to intellectual property rights and original design, which is conducive to the healthy development of the industry.

In China, there are numerous "fights" between companies. Between Midea and Gree, the two long-standing "court litigation battles" have lasted for more than a decade, with more than sixty litigation cases! There are also dozens of litigation cases between ZTE and Huawei. Several major mobile phone manufacturers have also been intertwined from time to time ... However, after ZTE was sanctioned by the United States, Huawei canceled the last prosecution of ZTE and revoked the administrative judgment of the Beijing Intellectual Property Court, which won a good reputation .