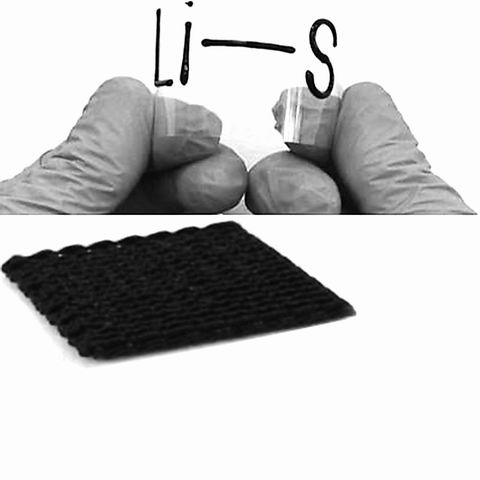 The realization of "long battery life" for drones, electric cars, and electric planes has always been something that people eagerly await. However, due to the lack of a stable "storage" and "power supply" power system, this expectation will always fall short.

What is gratifying is that good news has recently come out-the use of 3D printing technology may help solve the bottleneck problem facing "long life".

A few days ago, Sun Jingyu, a professor at the School of Energy, Suzhou University, and a team of Liu Zhongfan, academicians of the Chinese Academy of Sciences and Peking University, built a 3D printed sulfur cathode and obtained a lithium-sulfur battery with high rate performance and high surface capacity. Related technologies can also be extended to other emerging energy storage equipment, providing an important reference for the development of new, efficient and large-scale electrode construction methods.

The "shuttle effect" in lithium-sulfur batteries

With the development of human society, people have put forward higher requirements for energy storage systems.

Lithium-sulfur batteries are considered to be one of the most promising energy storage systems for the next generation because of their higher theoretical energy density, lower electrode material cost, and positive electrode sulfur environmental friendly and abundant resources.

"Lithium-sulfur batteries have huge industrial application prospects in the fields of drones, electric vehicles and military portable power supplies." Sun Jingyu, co-corresponding author of the paper, told the China Science Journal. Unfortunately, due to the low conductivity of sulfur and its discharge products, the shuttle of polysulfides and the slow reaction kinetics, the utilization rate of sulfur is low, and the cycle stability and rate performance are poor.

In recent years, in order to improve the utilization rate of active material sulfur and improve the electrochemical performance of lithium-sulfur batteries, researchers have conducted a lot of exploratory research in an effort to find suitable sulfur host materials, binders, and electrolytes.

Although many research progress and achievements have been made in these fields, most lithium-sulfur battery systems still have problems such as low sulfur loading, low surface capacity, and excessive use of electrolyte, which are far from meeting practical application and commercialization requirements.

Relevant studies have shown that one of the important factors that lead to insufficient energy density and short cycle life of current lithium-sulfur batteries is the "shuttle effect" of polysulfides.

Chen Jian, a researcher at the Dalian Institute of Chemistry and Physics, Chinese Academy of Sciences, told the China Science Journal that the so-called "shuttle effect" is the electrochemical reduction of sulfur in a lithium-sulfur battery during the discharge process. The intermediate product of sulfide (Li2Sx) can be dissolved in ether electrolyte. If it diffuses to the negative electrode, it reacts with lithium to form insoluble lithium sulfide, which is corroded and consumes active materials, causing irreversible loss of capacity and reducing the cycle life of the battery.

"Suppression of the'shuttle effect' is one of the keys to lithium-sulfur battery research. The core is how to bind the long-chain polysulfide generated in the reaction to the sulfur positive electrode side, or fundamentally suppress the generation of polysulfide. This It is feasible in principle, but it needs further exploration." Chen Jian said.

Since its birth, 3D printing technology has been applied to various fields such as medical, military, aerospace, automotive, and electronics. In addition, it has also been initially used in energy storage systems such as lithium-ion batteries, lithium-oxygen batteries, and zinc-ion batteries.

Liu Zhongfan and Sun Jingyu team have long paid attention to and carried out research on olefinic energy materials and application technologies. In recent years, they have found new breakthrough ideas and inspiration from 3D printing technology.

Sun Jingyu introduced that 3D printing technology has many advantages, such as helping to build a self-supporting non-collector electrode with a multi-level pore structure, and is conducive to the rapid transmission of ions and electrons. 3D printing technology controls the amount of electrode material loading by controlling the number of printed layers, breaking through the thickness limitation of electrodes prepared by conventional coating methods, thereby obtaining a battery system with high unit surface capacity. In terms of practical application, it can meet the construction needs of customized and large-scale energy storage devices.

"However, there are still many key bottlenecks in the 3D printing technology for energy storage applications. For example, the printing accuracy of electrodes places higher requirements on device configuration, the preparation process of printing ink is urgently needed to be systematically explored, and the lack of large-scale printing equipment. "Sun Jingyu said.

The researchers used 3D printing technology to construct a high-load sulfur cathode conveniently, efficiently, and conveniently. The structure has optimized ion/electron transmission channels and sufficient porosity, which is conducive to the efficient management of polysulfides.

In order to better suppress the "shuttle effect" mentioned above, the researchers also have unique designs for printing inks.

Sun Jingyu said that in recent years, the industry has been interested in building high-performance lithium-sulfur batteries with metal borides. Among them, metallic lanthanum hexaboride (LaB6) with similar properties has been widely used in many fields as a low-cost and sustainable compound.

Based on this, they designed a mixed ink containing sulfur/carbon and LaB6 electrocatalyst for printing high-performance sulfur cathodes. The metallic LaB6 electrocatalyst can be evenly distributed in the 3D printing architecture, spontaneously ensuring that there are abundant active sites for the fixation and conversion of polysulfides, thereby achieving a highly efficient discharge or charging process.

"This has played a positive role in the control of polysulfides and more effectively suppressed the'shuttle effect', thereby obtaining a lithium-sulfur battery system with excellent performance. At the same time, it was also designed to design the cathode structure of lithium-sulfur batteries and improve the reaction of sulfur cathodes. Kinetics provides new ideas and strategies." Liu Zhongfan said that the research work for the first time introduced high-efficiency electrocatalysts into printable ink to construct a 3D printed sulfur positive electrode, and obtained a lithium-sulfur battery with high rate performance and surface capacity.

There is still a "barrier" towards practicality

In recent years, the continuous innovation of new technologies and methods and the accelerated transformation of scientific and technological achievements have promoted the practical development of high-performance lithium-sulfur batteries. The team of Chen Jian and the lithium-sulfur battery pack produced in cooperation with Zhongke Pais Energy Storage Technology Co., Ltd. based on the scientific and technological achievements of the Dalian Institute of Chemistry and Physics of the Chinese Academy of Sciences have been successfully tested on large-wing wingspan drones and high-speed drones. .

"The life time of this lithium-sulfur battery is 2.5 times that of a lithium-ion battery of the same weight." Chen Jian said that in the future, the number of battery cycles needs to be further increased, and to achieve this goal, the "shuttle effect" problem also needs to be solved.

"In the process of practicality and industrialization, there are still many key issues that need to be resolved in the lithium-sulfur electrode. The development of sulfur positive electrodes for 3D printed self-supporting structures is worthy of attention." Liu Zhongfan said.

Sun Jingyu added that in addition to the requirements for the large-scale preparation of high-capacity sulfur electrodes, three issues need to be considered.

The first is the carbon content of the positive electrode. Sun Jingyu pointed out that in order to solve the problem of sulfur insulation, it is usually necessary to add a larger amount of conductive carbon to balance, resulting in a low volume energy density of lithium-sulfur batteries. Therefore, in order to obtain a lithium-sulfur battery with high volume energy density, it is necessary to increase the tap density of the sulfur positive electrode and use a host with less or no carbon sulfur.

In addition, the metal lithium anode is also one of the key issues, that is, in a large-scale lithium-sulfur system, it is necessary to adopt strategies to inhibit its dendrite growth, etc., to ensure the safety of the lithium anode.

"In the future, as an extension of this research, we hope to develop a lithium-sulfur battery system that is truly low-carbon or even free of carbon, poor electrolyte, and high-load sulfur." â€‹â€‹Sun Jingyu said. (â–  Han Yangmei, a trainee reporter of this newspaper)

Conventional underground coal mining relies upon the use of continuous miners in order to extract coal reserves from underground coal seams. In combination with the continuous miners, shuttle cars are used to transport the extracted coal from the face to a transfer point (feeder breaker). From there the coal is typically tipped onto the underground conveyor system, which transports the coal to the surface in order to be distributed to customers. Effective management of the cutting, loading and tipping cycles utilized in the sections serve as a possible area for productivity improvement.